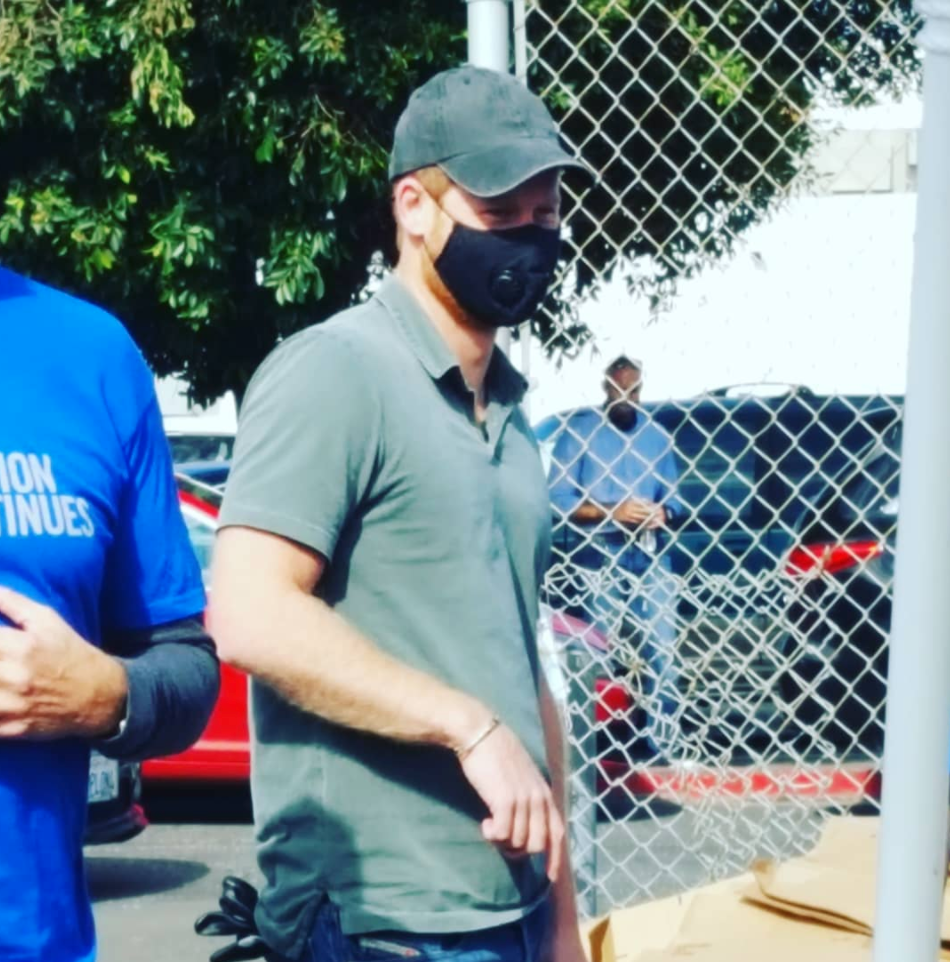 In an appearance that was less than Royal, last Friday, Prince Harry volunteered with the Walker Family Events Foundation in Compton, California. The Prince dressed down in jeans, and a baseball cap and finished the look with a mask, of course- as he volunteered at the Veterans of Foreign Wars of the United States (VFW).

The Duke of Sussex, 36, volunteered alongside the Walker Family Events Foundation which is a community-based charity in Los Angeles, California. The Walker Family Events Foundation is currently working with the VFW of Compton and Compton Veterans on an initiative called,  Operation Nourish Program. Operation Nourish Program is an initiative focused on packing and distributing food to veterans in the Compton area.

Harry drove a little over 100 miles south from his home in Montecito to join Compton Veterans with packing food parcels. It is unclear if the Prince helped distribute the packages himself. Prince Harry attended the volunteer event without cameras, without fans present and and without making an official announcement. The only way the public found out of this volunteer work was thanks to a post on the Walker Family Foundation Instagram account.

The organization described Harry as “humble and very kind.” Walker Family Events wrote, “Today I had the honor of meeting and working alongside Prince Harry, Duke of Sussex 👑 . He joined us in volunteering at Compton VFW for the weekly Operation Nourish program packing and distributing food to our #Compton neighbors.” Walker Family Events, Compton Veterans and the VFW have been working extremely hard on Operation Nourish. The mission of this particular initiative is to prioritize veteran’s mental health by mobilizing them in service of combating food insecurity- according to The Mission Continues, which is also involved in the program.

The appearance comes just days after Prince Harry and Meghan Markle visited the Los Angeles National Cemetery on Remembrance Sunday, November 8. During their November 8 appearance, the famous couple wore commemorative poppies on their lapels as they laid flowers at the resting places of two Commonwealth soldiers. The Duchess actually picked the flowers from the garden of their home in Montecito. The Duke and Duchess were again, alone for this appearance, where the two laid a wreath that read, “To all of those who have served, and are serving. Thank you.”

As a former Captain in the British Army (for about 10 years!) Prince Harry never misses a chance to honor those who have served and lost their lives in the line of duty. In fact, the Prince has teamed up with Jon Stewart, Bruce Springsteen and other A-list celebs to take part in Bob Woodruff Foundation’s 14th Annual Stand Up for Heroes event. The event which will go virtual for the fist time ever is intended to raise funds for veterans. The 14th annual Stand Up for Heroes event airs TODAY, Wednesday, Nov. 18 at 9 p.m. EST on a ton of platforms: ABC News Live, TikTok, Facebook Watch, Cheddar, Twitch, and Armed Forces Network.

To learn more about the incredible work that Walker Family Events Foundation is doing, be sure to follow them on Instagram HERE or visit them online HERE. If you are in the Los Angeles area consider volunteering or donating what you can. With Thanksgiving right around the corner, a little help could go a long way. The organization is currently hosting coat drives as well as some food drives, visit them online for the most up to date opportunities to get involved. To learn more about Compton Veterans check out their Instagram online HERE or visit them online at https://comptonveterans.com/. They too are holding special volunteer events that Angelinos can get involved in. And be sure to tune in today to the 14th annual Stand Up for Heroes tonight at 9 p.m. EST.