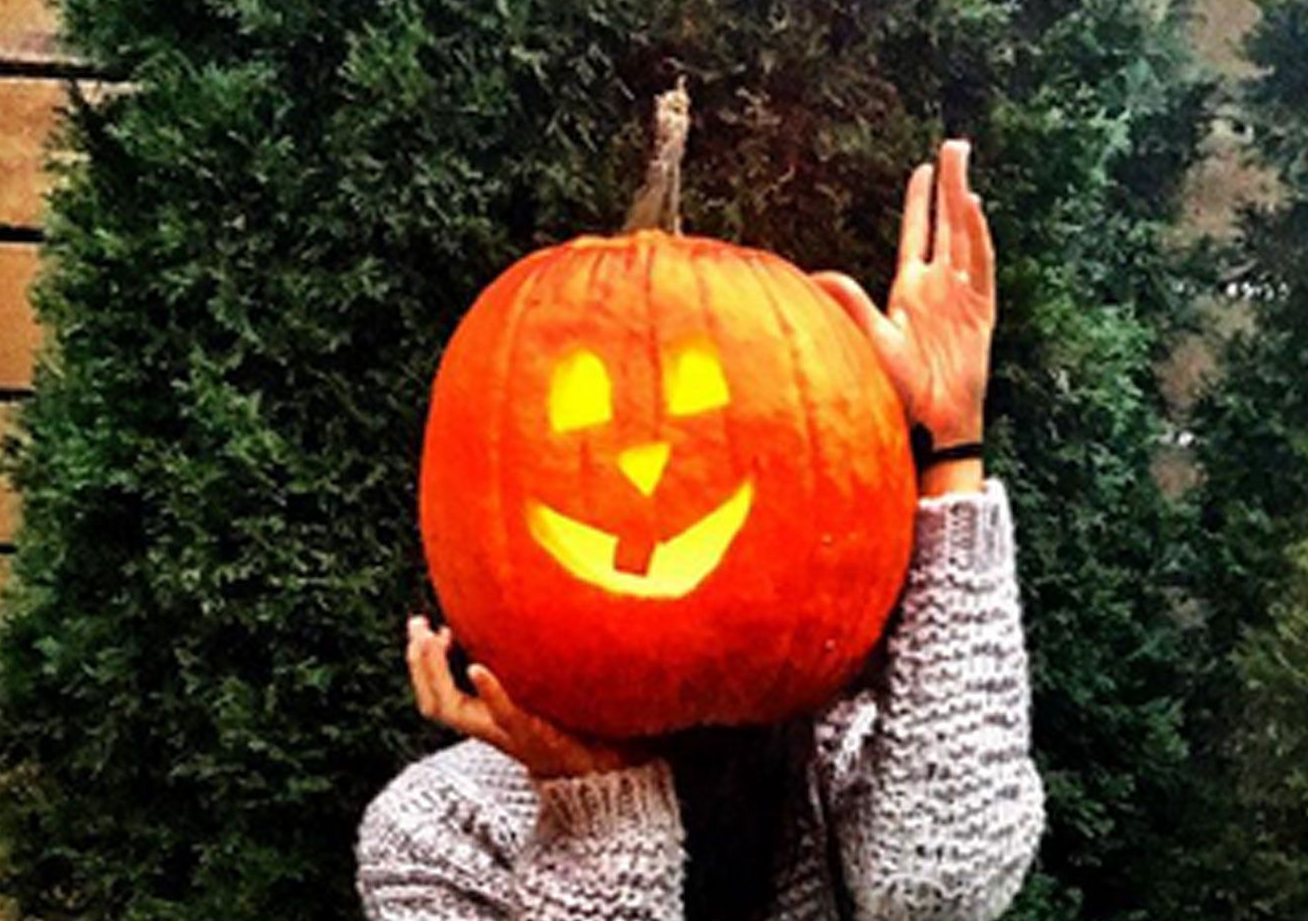 We recently re-discovered this fun photograph of the Duchess of Sussex posing with a jack-o-lantern. Naturally, curiosity (and the Halloween spirit) got the best of us and we had to do some digging and get the scoop behind the pic.  And as it turns out, the photograph has a pretty endearing back story after all.

We were reminded of the photograph by one of our followers on Pinterest- be sure to follow our DuchessLA account on Pinterest! The pic was originally posted on Meghan Markle’s now-deleted Instagram account, @meghanmarkle in 2016. The Duchess of Sussex strikes a flirty pose as she holds a carved pumpkin in front of her face; the caption reads, “Happy Halloween, friends #Halloween #pumpkin”. Even four years later, we are still loving the ultra-cozy grey cardigan Markle wears in the photo. She pairs the chunky knit with a short dress and finishes the look with what appears to be her now-iconic loose waves.

In the now deleted Instagram post, we noticed the date October 31, 2016 which means Meghan Markle and Prince Harry had been dating- might he be the one behind the camera?

The Royal couple, who met back in July of 2016, had been keeping their relationship a secret for months- until Halloween. Although the couple did not publicly announce their relationship until November 27, 2016, a British tabloid broke the story a month before the Royal couple could. “His Majesty’s pleasure: Prince Harry secretly dating U.S. TV star Meghan Markle” read the October 31st headline. Naturally the couple had hoped to keep their relationship private, and rightfully so. Shorty after their official announcement Meghan Markle became a target of the British tabloids – and for no good reason.  British tabloids printed flat out lies and hateful content regarding the American actress, ultimately leading the Royal couple to leave the Royal family for a life away from the British media in California.

But back to Meghan’s Instagram pic. As it turns out, the photograph was taken in Toronto while the actress while still filming, Suits. Reports claim that Prince Harry was actually in Toronto at the time the photo was posted as he had made a secret Halloween trip to visit his then girlfriend. Although we cannot confirm that the photo was taken by Prince Harry, we can’t deny it is not likely. The pic also proves how quickly the two fell in love. The Royal couple had only been dating for three months and already they would never go more than two weeks without seeing each other. Keep in mind, at the time, Meghan Markle was living and working in Toronto while Prince Harry was based in the U.K. A couple years ago Vanity Fair reported that Meghan would spend four days in the U.K, then take the red eye to Toronto to be back at work. The grueling schedule did not last very long as Meghan Markle left Suits shortly after, in January of 2018. It was then that the Duchess of Sussex relocated to be with her Prince in the U.K. – and the rest is history!

Just three Halloween’s later in 2019, Meghan Markle and Prince Harry have a new ‘little pumpkin’ to celebrate Halloween with, their son Archie. For last year’s Halloween, Sussex fans got a special message from the Royal couple by way of their Instagram account.  The photograph was originally taken in New Zealand with a group of Special Effects producers. The Duke and Duchess of Sussex wished their fans a safe and fun Halloween in a post they captioned, “Happy Halloween! 👻 “Wishing you all a safe and fun Halloween from our family (and our little pumpkin 🎃) to yours!.” Although you technically can’t see Archie in the photograph, you can spot Meghan Markle’s slight baby bump.

This year will mark the very first Halloween for baby Archie and the married couple. Given the current COVID restrictions in heir new home state of California, we are not sure the Duke and Duchess of Sussex will be able to enjoy some trick-o-treating with their son. Still, we cannot wait to see what the Duke and Duchess have up their sleeves for this year’s Halloween. We hope the Royal couple shares their costumes with their fans!

What are you dressing up for Halloween? Let us know in the comments!