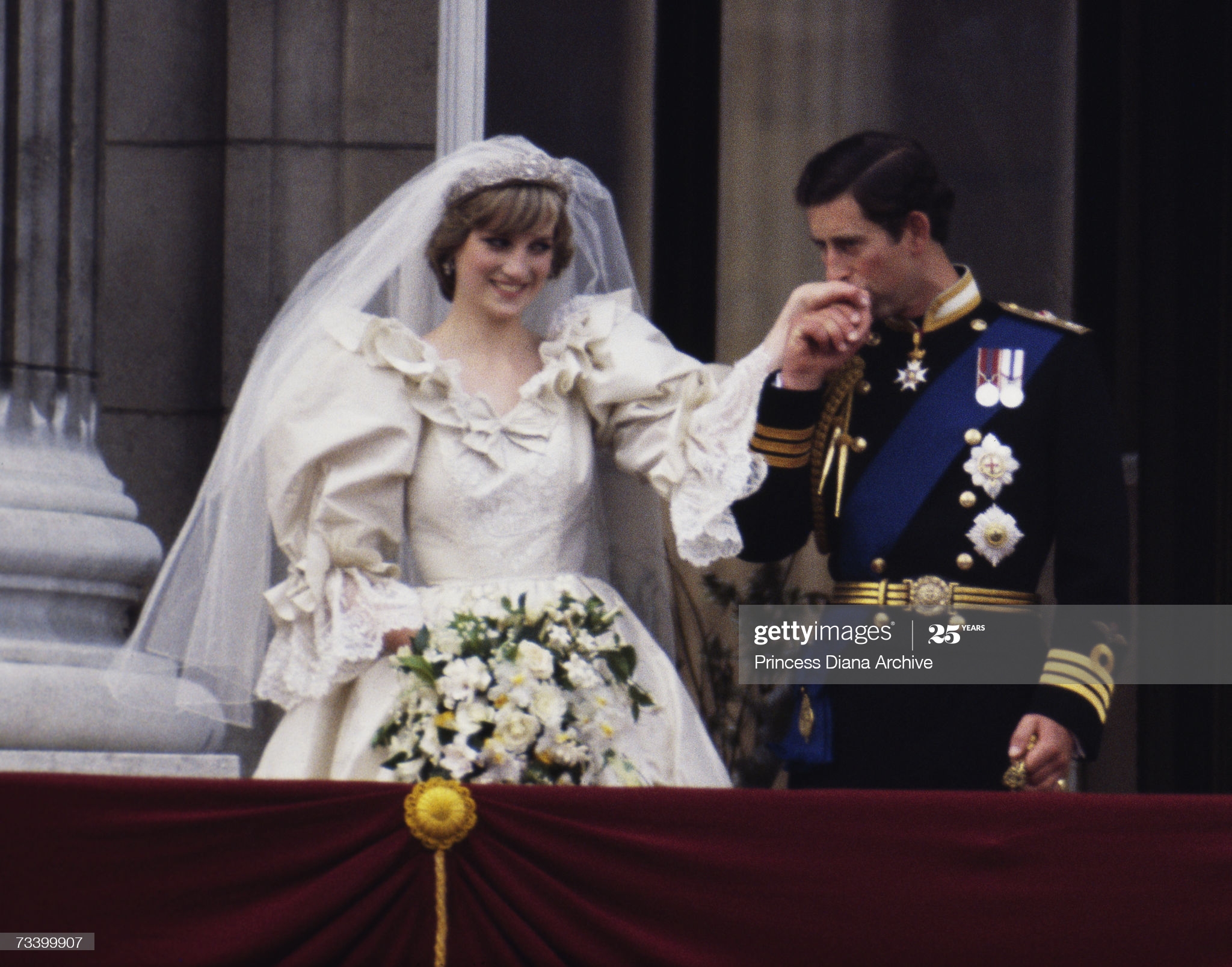 Princess Eugenie wore a bold gown by British designers, Peter Pilotto and Christopher De Vos. The dress had several thoughtful details including the textile design on the fabric of the gown. The pattern featured four symbols important to the couple including the the thistle for Scotland. But it was the lack of veil and intentional open back of the dress that caught our attention. When Princess Eugenie was only 12 years old she underwent an eight-hour surgery to treat her sever scoliosis which resulted in the large scar on her back. Throughout the years, Princess Eugenie has embraced her scar and she wanted to be sure to highlight it during her big day.

Princess Eugenie must have taken inspiration from her mother’s 1986 gown. Just like Princess Eugenie, Sarah Ferguson’s dress was filled with thoughtful details including embroidery inspired by her family crest. The very 80’s dress also featured a 17-foot train and was designed by little-known designer at the time, Lindka Cierach.

She may not be a British Royal but Princess Anne-Marie of Denmark had a wedding dress just as glamorous. The Princess, who is the third and last daughter of King Frederick IX wore a dress by Danish designer Jørgen Bender. The 1964 gown is iconic for its’ timelessness. The gown features a classic empire waist and three-quarter sleeves as well as a wide neckline, a trend seen in many Royal wedding dresses to come.

Countess Olympia von und zu Arco-Zinneberg had one of the most unique dresses of modern Royal times. The Countess, who is a descendant of the last emperor of Austria married Jean-Christophe, a descendant of Napoleon Bonaparte in the most stunning lace Oscar de la Renta gown. The Countess completed the look with a matching cape by the same designer.

Princess Beatrice turned to her grandmother, Queen Elizabeth for a little wedding inspo. In fact, Princess Beatrice chose to wear a gown by Norman Hartnell that belonged to the Queen. The taffeta and organza gown is trimmed with Duchess satin and encrusted with diamanté. Princess Beatrice made history by opting to go vintage for her Royal wedding.

Princess Charlene of Monaco’s wedding dress was magical. The gown was designed by Giogio Armani and took over 2,500 hours to make. It featured 40,000 Swarovski crystals, 20,000 mother of pearl teardrops and 30,000 stones in gold shades.

Meghan Markle’s wedding dress is one of our favorites for its elegant simplicity. The former actress looked to Clare Waight Keller at Givenchy to design the gown. Clare Waight Keller is the first female artistic director at Givenchy and considering Meghan Markle’s strong feminist stance, it is only right she chose the designer. The gown featured a wide boat neck and a triple silk organza under-skirt which gave the skirt its volume.

Next on the list is another American Princess. Princess Marie-Chantal of Greece wore a dress by designer Valentino to her wedding. The pearl-encrusted dress featured a stunning 13 foot train.

Queen Letizia of Spain is a Royal Fashion icon in her own right so naturally her wedding dress was breathtaking. The bride wore a dress by designer, Manuel Pertegaz that featured an open collar, long-sleeves and real gold for the smaller details.

During her 2011 wedding to Prince William, Kate Middleton wore a Victorian inspired dress by designer, Sarah Burton at Alexander McQueen. Her train was nearly nine feet long and the lace work was done entirely by hand.

Like many brides, Queen Rania of Jordan wore more than one dress to her wedding. But it is the dress she wore during the ceremony that caught our attention. The gown was by designer Bruce Oldfield and featured an open collar with gold details. The bried wore matching shoes.

Queen Jetsun Pema also had a couple of outfit changes throughout her wedding celebrations. Her ceremony dress is the most memorable.

That is right, Meghan Markle is on the list once more for her now iconic second wedding dress. The dress which she wore to the reception was by Stella McCartney and is unlike any other Royal wedding gown in the past.

The model turned Princess wore a traditional sari in ivory and gold. The intricacy of the gown is breathtaking.

Grace Kelly is iconic for many reasons, and her wedding dress was just as incredible. Some fans may be surprised to hear that Grace Kelly’s wedding dress was actually a gift from MGM. It was a design by Academy Award-winning costume designer Helen Rose.

Another Hollywood Icon makes our list. Rita Hayworth’s 1949 wedding gown was designed by Christian Dior. The long-sleeved top with a pleated skirt was a different approach to the classic ball-gown style Royal gowns of the time.

Wallis Simpson also wore a very non-traditional gown to her wedding. The bride wore a floor-length silk dress featuring a gathered waist. The gown was designed by Parisian designer, Mainbocher.

During her wedding to the future King of England, King George VI, Lady Elizabeth Bowes-Lyon wore a gown by dressmaker Madame Handley-Seymour. The dress was indicative of 1920’s fashion.

Princess Diana had one of the most iconic wedding dresses of all time- royal or not. The dress was designed by the then married couple, Elizabeth and David Emanuel. The train was the longest in Royal history coming in at a whopping 25 feet.

Queen Elizabeth wore a stunningly detailed wedding gown to her wedding. The dress was designed by Norman Hartnell and featured a 15-foot train.

And lastly, the wedding dress that started it all, Queen Victoria’s wedding dress. To help stimulate the British lace industry, Queen Victoria opted for Honiton lace to create her dress even though it was not the popular lace of the time. The dress was also used to showcase practicality and patriotism as Queen Elizabeth married as Queen and not Princess. In short, Queen Victoria was the first to draw attention for who designed her dress and why.

Which is your favorite? Tell us in the comments!