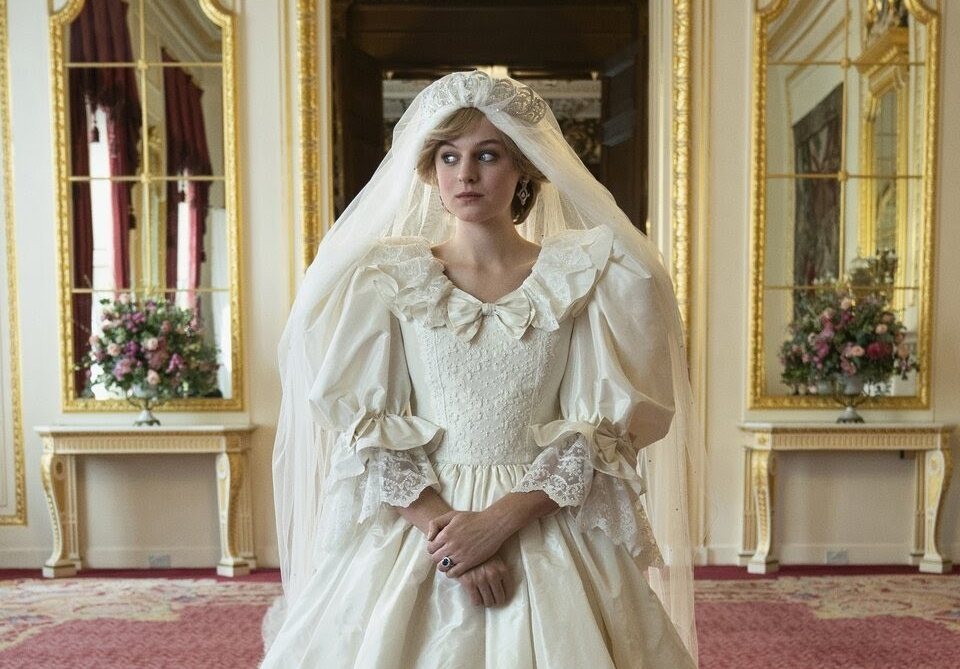 Emma Corrin, who plays Princess Diana in the new season of the hit Netflix show, The Crown, made a bold statement regarding the Duchess of Sussex, Meghan Markle. During the candid interview, Corrin draws parallels between the media’s treatment of Meghan Markle and Princess Diana. During her sit down interview with Town and Country’s Elizabeth Holmes, the actress explained why she thinks ‘history is repeating itself’ with Meghan Markle.

Long time Royal fans remember the turbulent relationship Princess Diana had with the tabloids- some even blame them for her death. Many people even remember exactly where they were when they heard of Princess Diana’s death. Washington Post contributor, Roxanne Roberts recalls the exact moment she heard of the Princess’ death and how it impacted the entire country, “On the night of Aug. 30, 1997, I attended a play and then dropped by a nightclub… when I got into my car and flicked on the radio to hear the shocking news: Princess Diana had been killed in a horrific accident” she writes. “I witnessed the raw grief and outrage of the British people. Their anger at the royal family and their fury at the media, especially the paparazzi, whom they blamed for the car crash.”

Four years after Princess Diana’s separation from Prince Charles, the two finally made their divorce official in 1996. Much like the agreement between Queen Elizabeth and the Duke and Duchess of Sussex, Princess Diana had to agree to certain terms pertaining to her status in the Royal Family. Although she had to relinquish her right to use ‘Her Royal Highness’ she would continue to receive the benefits she did when married to Prince Charles. This is because she will always be considered the mother of one of the future Kings of England.

After leaving the Royal family, Princess Diana began dating Egyptian filmmaker and billionaire heir, Dodi Al-Fayed. Their relationship was pretty serious with some reports claiming Dodi had actually purchased a ring for Diana on August 30th. But is was that same night that the two were caught in a high-speed chase in Paris – trying to outrun the paparazzi that had hounded them all day. The chase ended when the Mercedes carrying Princess Diana, Dodi Al-Fayed, driver Henri Paul, and bodyguard Trevor Rees-Jones crashed into a column at the Pont d’Alma Bridge. Rees-Jones was the only survivor, Dodi and Paul died at the scene. Princess Diana died a few hours later at the La Pitie Salpetriere Hospital.

Emma Corrin, who plays Princess Diana in The Crown has had her fair share of exposure to the late Princess’ life and struggles. When speaking to Town and Country, Corrin says with regards to Princess Diana, “The coldness, the traditions, and the expectations of behavior…I don’t think she expected that, I think she expected to join a family.” When speaking of Meghan Markle and her experiences with the media, Corrin goes on to say, “You just want to shake these tabloids and say, can’t you see history repeating itself?”

And yet, it’s as though the media did not learn a thing from the events leading up to the tragic night of August 30th, 1997 – the night Princess Diana lost her life.

It’s important to note, that not only did Corrin speak to this truth, but Holmes also shed light on the cruelty of the British tabloids, “Speaking of ugly, it’s impossible to watch Diana’s entrance and attempts to acclimate without thinking of the treatment of Meghan Markle” she wrote. “Besieged by racist tabloids and reportedly unsupported by the royal family, Prince Harry and his bride left their roles as senior working royals last spring.” It’s refreshing to hear a different perspective on Meghan Markle’s relationship with the media- one that is the completely different than the over-exaggerated and often false news reported by the UK tabloids.

Today, Meghan Markle deals with a different kind of media scrutiny, one that has moved entirely online. Since the former actress began dating Prince Harry, Meghan Markle has been the target of countless false reports. The media’s treatment of Meghan was so brutal that in April, the couple was forced to announce that they would no longer be engaging with any media including The Sun, The Daily Mail, and The Mirror. In an official statement regarding this decision, the couple’s team said, “There is a real human cost to this way of doing business and it affects every corner of society. The Duke and Duchess of Sussex have watched people they know – as well as complete strangers – have their lives completely pulled apart for no good reason, other than the fact that salacious gossip boosts advertising revenue.”

Just this month, Markle sat with Teenager Therapy to speak on the importance of mental health and how to cope. During the interview, the former actress shed some light on how she feels about being the target of lots of scrutiny online. The Duchess of Sussex explained, “I’m told that in 2019, I was the most trolled person in the entire world, male or female.” She went on to say, “Now, eight months of that, I wasn’t even visible — I was on maternity leave or with the baby — but was able to just be manufactured and churned out, it’s almost unsurvivable.” Although Meghan Makle never got the chance to meet her mother-in-law the parallels in their experiences are very similar.

It is no surprise Prince Harry opted to relocate his family far from the tabloids to the small neighborhood of Montecito, California. Although the two have not given up the spotlight, they are using their platform for good. Since moving to Los Angeles, Meghan Markle and Prince Harry have been spotted at several volunteer events for organizations such as Homeboy Industries and Project Angel Food. The famous Royal couple has also been active online publishing several interviews where they speak out on the importance of voting and voter suppression. Just yesterday, they launched the official website for their charity, Archewell which will have no association with the Royal Family. Needless to say, we think Princess Diana would be proud of the steps the couple is taking in making a life of their own.

The new season of Netflix’s, The Crown premiers November 15th.