Meghan Markle: “If you listen to what I actually say, it’s not controversial” 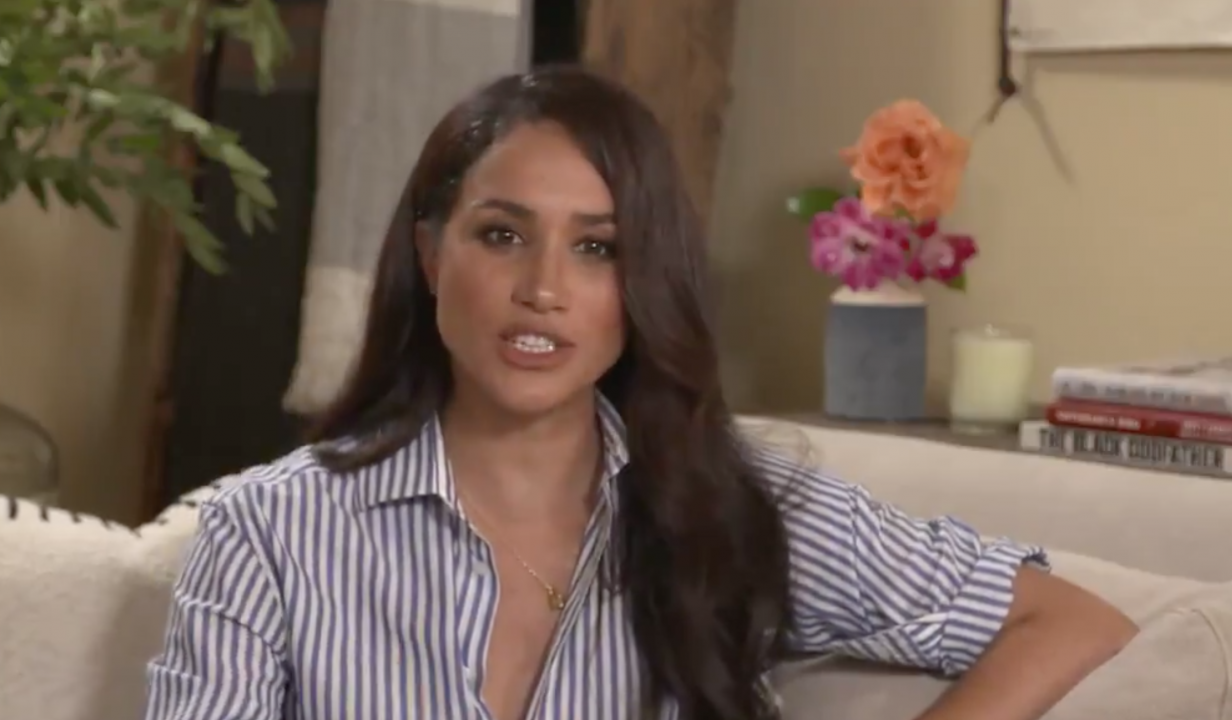 Updated October 2020: Meghan Markle is one of Fortune Magazine’s Most Powerful Women and she is addressing, head-on the spread of misinformation and online trolls.

Meghan Markle sat down with Fortune Magazine editor, Ellen McGirt as part of the magazine’s, Most Powerful Women Virtual Summit. The pre-taped interview is a virtual experience and appears to show the Duchess of Sussex in her new home in Montecito, California. In the new video, which you can watch below, Meghan Markle addresses the obstacles in creating what she calls, “human-tech” with regards to online spaces. The Duchess of Sussex also spoke candidly about her personal experiences with dealing with online hate. Meghan Markle even directly addresses online trolls which include the President of a very powerful country.

Ever since the former actress began dating Prince Harry back in 2016, she has been the ‘whipping boy’ for British tabloids. Specifically, there are a handful of British tabloids that have had a field day printing false information regarding Meghan Markle and those around her- we will not be naming them so as to not draw any further attention to them but check out the tweet below to find out more. The spread of misinformation done. by these tabloids in particular boiled over when back in April of 2020, the couple had to issue an official statement regarding their relationship with these specific British papers. The statement, which was released by representatives of the couple was actually specifically addressed the editors of the four tabloids. In the letter, Meghan Markle and Prince Harry’s team write, “As The Duke and Duchess of Sussex now settle into the next chapter of their lives and no longer receive any publicly funded support, we are writing to set a new media relations policy, specifically as it pertains to your organization.” The letter continues, “The Duke and Duchess of Sussex have watched people they know- as well as complete strangers- have their lives completely pulled apart for no good reason, other than the fact that salacious gossip boost advertising revenue.” Kudos to the couple for doing something that no other Royal family member has done in the past, which is to draw a direct boundary between those printing false information and themselves.

See the full letter below:

Additionally, just last month, Meghan Markle sat with members of the podcast, Teenager Therapy where she gave further insight as to how this negativity truly impacts her. During the honest interview, the former actress explains, “I’m told that in 2019, I was the most trolled person in the entire world, male or female.” It is important to note, however, that during 2019 Meghan Markle was on maternity leave, I wasn’t even visible — I was on maternity leave or with the baby — but what was able to just be manufactured and churned out, it’s almost unsurvivable” she reveals.

The media is not all to blame for this negativity, however. Meghan Markle has also been the target of some pretty powerful people including the President of the United States. During her conversation with McGirt, the Duchess of Sussex was asked to speak of her own experiences with dealing with “powerful people”. McGirt asked, “You’re not the only powerful woman… who has had a president, mobs come after you, powerful people and powerful forces try to take you down… what is your best advice?”

Meghan Markle, in true Duchess style, eloquently delivered her response without directly pointing fingers, “It’s about being authentic,” she said. “If you look back at anything I’ve said… what ends up being inflammatory it seems is people’s interpretation of it. But if you listen to what I actually say it’s not controversial and actually, some of it is reactive to things that just haven’t happened.”

Although McGirt did not outright name which President has targeted Meghan Markle, Royal fans may remember the short-lived feud (if you can even call it that) with President Donald Trump. Meghan Markle and President Trump made headlines when the President stated, “I’m not a fan of hers,” prompting the media to go absolutely bananas. What makes Meghan Markle’s statement powerful, however, is that she too does not drop names or even react in an emotional manner, at least not on screen. The Duchess in true Royal fashion keeps her cool and talks directly to the camera as she encourages her fans to take the high road.

For Prince Harry and Meghan Markle, it is more than just about them. The Royal couple has spent much of therr summer advocating for others and for a universal safe space online. Last month, during the couple’s appearance on TIME 100’s Most Influential People, the couple teamed up to deliver a message regarding online engagement and encourage positivity, “We need to redraw the lines of how we engage with each other both online and off” said Meghan Markle. “What we’re exposed to online seeps into how we engage with each other offline, it can train us to be kind or train us to be cruel.” Harry mirrored her statements in stating, “When one person buys into negativity online, the effects are felt exponentially.”

With regards to bots and trolls, Meghan Markle said, “It’s like we live in the future when you’re talking about bots and trolls and all of these things… It seems so fantastical, but that’s actually the current state of affairs” she explained. She went on to say, “…and that is shaping how we interact with each other online and off — and that’s the piece that’s important. It is not just an isolated experience. It transcends into how you interact with anyone around you and certainly your own relationship with yourself.”

As always, The Duchess calls for a plan of action where we all take responsibility for what happens on and offline, “We have got to all put our stock in something that is true and we need to have reliable media and news sources that are telling us the truth…when you know something is wrong, report it, talk about it”.